Upon hearing that one of the perhaps biggest and most well known classic films of all time is being re-made “The Clash Of The Titans” I am led to question the sanity of the film industry and wander why I myself still want to enter into this dizzying field of what can only be currently described as filth. The plight of re-making something which is already brilliant has been going on for too long it seems. So I have generated a list of my top five films which should never have been touched by the greedy hands of Hollywood producers. 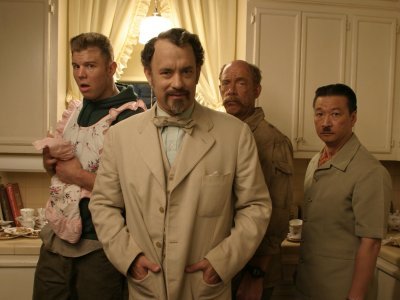 1.The Lady Killers.
Released in 1955 writer William Rose and director Alexander Mckendrick created this charming little piece of cinema following the antics of a group of bumbling bank robbers who end up having to murder the quaint old lady who they rent a room from. Unable to do so they all die in the process. Its beautifully shot in black and white and features some amazing performances from great actors such as Alec Guinness. Then in 2004 Ethan and Joel Cohen stepped in to piss triumphantly all over a wonderful film, taking it out of the country, altering key scenes and removing any of the original style and general dry wit of the film to reduce it to some humdrum Southern state, pun filled piece of bargain bin trash which even Tom Hanks couldn’t save.

2.The Pink Panther
Now the idea of recasting Peter Sellers in the first place should of stopped director Shawn Levy in his tracks, not least Steve Martin handed him this piece of manure of a performance, but sadly it did not and so the train was boarded and the collision with a comedy classic was led from the station into the ravine of what should of been a straight to DVD movie.

3.The Wicker Man
Take one big ass needle and jam it deep into the center of the Edward Woodward/Christopher Lee cult thriller and suck out all the tension and macabre of the plot. Then put in a Nicholas Cage and hope for the best. Heres a hint….it didn’t work.

4.Around The World In 80 Days
Another tragic case of America pushing its dirty mits into British cinema, this time involving a decent British actor, who unlike Steve Martin should have known better thanks to his involvement with the Sgt Bilko remakes. Strung together with cheap martial art’s slapstick and an extremely labored attempt at anything half comical, it bares little if any resemblance to the original film and novel other than the title. This wouldn’t be such a bad thing if they had reworked the idea completely e.g. the Batman remakes.

5.Back To The Future
Now this is cheating the list a little and I’m hoping that this appalling remake wont materialise, however there is currently a fast tracking of the Back to the Future trilogy. Brace yourselves readers it gets worse, Steven Spielburg is said to be directing. Hark I hear you say, “wasn’t he involved with the originals?” in fact he was executive producer of those cult classic wonders but then lets face it he gave George Lucas a hand and look what happened there, not to mention the raping of Indiana Jones.  But the avalanche continues, Shia Lebouf is rumoured to be first choice for the role of Marty Mcfly. Now please, if anyone knows someone who can stop this film being remade, do so. Now. This is one of those series which should never be touched, the effects are still great and in some cases better than toady’s cgi outputs (X-Men Origins: Wolverine anyone?…), it has two amazing actors (Micheal J Fox and Christopher Lloyd) in two of their best performances. Back to the Future is an absolute gem, it should not be remade and I beg of thee, someone out there come to your senses.